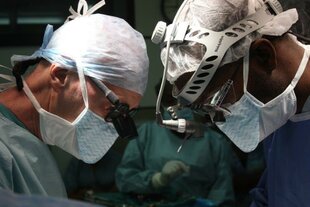 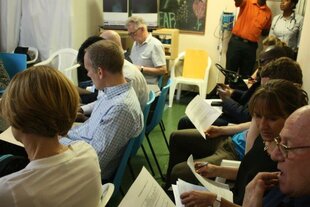 Renowned cardiac surgeon Mr Egil Seem, from Oslo University Hospital in Norway, conducted his third specialised medical mission to Jamaica in February. He was supported by an international Chain of Hope volunteer team, including Dr Alan Magee, who carried out five interventional catheter treatments. Overall 9 children were treated on the mission. Eight children recovered well from their operations, but the team were very sad to lose two year old Malique, a twin born with a heart murmur, who passed away from complications following his surgery.

Chain of Hope cardiologist and member of our Medical Board, Dr Alan Magee, met a very interesting former patient. Ugo, a Rastafarian from Montego Bay, underwent a Ross Procedure from Dr Donald Ross himself back in 1978 and then 15 years ago Chain of Hope’s Victor Tsang replaced a valve in his heart. Ugo consented to having a pig’s valve to replace his faulty one, despite his religious beliefs, and today the valve is still going strong! Ugo is pictured below with Dr Magee and with Mr Tsang.

This mission was joined by Professor Jane Somerville, a pioneering cardiologist who worked with the local team on their follow-up services. A number of patients previously treated by Chain of Hope attended Professor Somerville’s Grown Up Congenital Heart Disease (GUCH) Clinic, where their well-being and progress were assessed.

One such patient was 31 year old Camille, who was contemplating the possibility of having children. This brought up some serious questions about what care and monitoring might be available to Camille throughout her pregnancy, and the ethical dilemma faced by cardiologists in advising what is possible, and the potential risks.