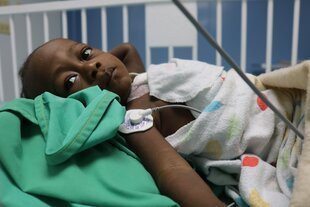 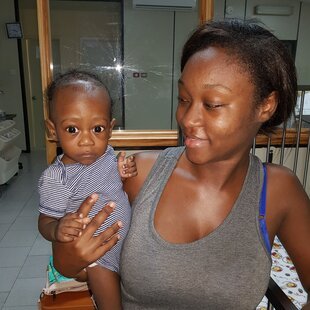 First time parents, Shamona and Jeremy from St. Catherine in Jamaica are the happiest and most grateful parents today, knowing their eight-month-old Son, Raheem has received the gift of life for the New Year.

Raheem is the first child for 2018 to receive corrective open-heart surgery, sponsored by Chain of Hope, in the new dedicated Paediatric Cardiac Unit at the Bustamante Hospital for Children in Jamaica.

He is one of four children who were operated on in January by local Consultant Cardiac Surgeon Dr Sherard Little, with support from an international volunteer medical team organised by Chain of Hope.

A further seven children were operated on between November and December 2017, in the new unit.

This new facility, which will give the hospital the ability to perform more life-saving heart surgeries was built and equipped by local and international partners, Shaggy & Friends, Digicel Foundation, Sagicor Foundation, Chain of Hope, Gift of Life International/Rotary, National Health Fund and the South East Regional Health Authority (SERHA).

However for Shamona, this is one of the best things that could happen to her and her new born baby.

She recalls the day when she found out her son was not well as ‘shocking’, but said she’s been hopeful since then.

‘One day I was bathing him and I realised he was gasping for breath, he wasn’t well and his lips changed colour and he was vomiting.’ She explained.

It was those symptoms and more that led her to bring her new born baby back to the clinic, where he was then referred to the Bustamante Hospital for Children.

At four months old Raheem was diagnosed with a very common heart defect known as Ventricular Septal Defect (VSD), which means there is a hole in the middle of his heart. This prevented him from breathing properly, gaining normal weight and he also had periods of high blood pressure.

Shamona remembers the day clearly, October 17th 2017, when her son was admitted to the Bustamante Hospital and the Doctors told her, her son would now need surgery to live a longer and healthier life.

‘Nothing happened for a while, he was just there on medication. Then he was to do the surgery in November but got an infection, and I was so worried for him’, she said.

‘When they took him in (for surgery) I was crying and a little worried because of what the Doctors told me….but now he’s got the surgery to help him and I am so happy, everybody is just so happy, thank you,’ She continued.

Chain of Hope’s Chief Executive, Emma Scanlan says the charity is delighted to have played a part in helping young Raheem.

‘Chain of Hope has committed to continue supporting Dr Little and the local team at the Jamaica Children’s Heart Centre, on the grounds of Bustamante Hospital, to ensure that the children of Jamaica can get the treatment they deserve.’ Ms Scanlan said.

She noted that Chain of Hope will also continue to work in collaboration with partners such as, Gift of Life International and Rotary, to ensure the waiting list for cardiac surgery at the Bustamante Hospital is reduced, while offering support to the local team.

In reflecting on the recent activities in the new unit, Dr Little said this ‘should further encourage and embolden the local team (as they strive) to improve the cardiac services at the Bustamante Hospital for Children.’

Now that Raheem has a mended heart, his Mum Shamona has one wish.

‘I just want a better life with him now, since the surgery is over. I can’t wait to take him home and go out with him, because back then I couldn’t do that, because I didn’t want him to catch any infection, so I would have to just keep him home.’ Shamona added.

The new dedicated cardiac unit at the Bustamante Hospital for Children will be officially opened later this year, providing the hospital with more ICU beds for cardiac surgery, a brand new operating theatre and a Catheter Laboratory.