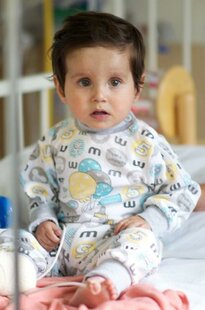 Manwel was born with a severe congenital heart defect and was unable to receive the life-saving treatment he needed in Iraq. His situation grew more desperate last year, after his village became caught up in the Middle East conflict. Manwel’s family left everything behind and fled north, but have since been displaced to Jordan where they are currently living as refugees.

Luckily, Manwel was referred to our Medical Board, who approved his case for imminent surgery. He flew over just before his first birthday, so we got him a little cake to celebrate in the office with the team! The next week, he was admitted into the Royal Brompton Hospital for surgery with Chain of Hope surgeon Mr Michielon.

After eight hours of surgery Manwel began to recover well, and was promptly discharged from Intensive Care onto the ward. Manwel went back to his family in Jordan with his delighted mother, you can see them pictured at the airport below!