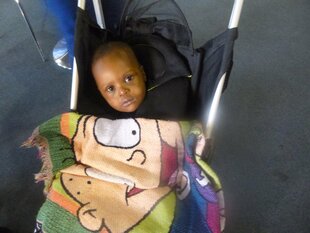 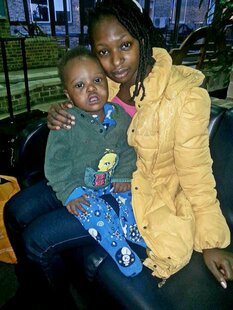 At only a few months old Joe was diagnosed with a hole in the heart, but was unable to get the surgery he desperately needed in Uganda. As he grew more and more unwell, Joe’s mother had to sell the shoe shop she ran to be able to pay for Joe’s medicine. After being referred to Chain of Hope through a partner organisation in September 2015, Joe was flown to London shortly before Christmas for urgent surgery at the Royal Brompton Hospital.

Joe has Down’s syndrome, which led to complications during his recovery, and it was touch and go as he spent nearly a month in Intensive Care following his operation. Everyone breathed a huge sigh of relief when Joe was finally on the mend! After recovering in the care of a host family, Joe and his mother returned home last week to be reunited with their family in Entebbe, just in time for his second birthday next month. Thanks to the further generosity of our supporters, they were able to take with them a supply of donated clothes and shoes so Joe’s mother can start up her own business again.