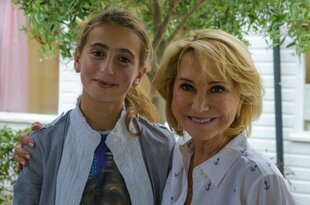 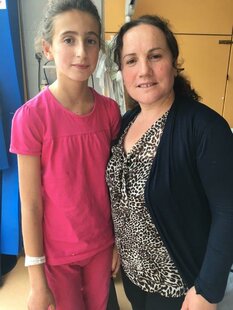 Our ambassador, Felicity Kendal, CBE, recently visited one of our patients to give them a boost after their open heart surgery! 12 year old Arjeta was our first child from Kosovo to come to London for treatment.

Arjeta’s case was particularly difficult as she was suffering from a very rare heart defect called Aortopulmonary Window. Her condition meant that there was a hole or ‘window’ between the two major arteries in her heart. Arjeta’s age made her case even more unusual, as the surgery to correct this defect is usually only performed on babies. Gift of Life Kosova referred Arjeta to Chain of Hope, and our Medical Board reviewed her case. Due to the complex nature of her heart defect and the lack of MRI facilities in Kosova, our doctors were unable to determine whether Arjeta would be operable before she arrived in the UK.

When she arrived she was welcomed into Evelina Hospital in London where she underwent several diagnostic tests and scans. Much to our relief, Arjeta was approved for surgery and we sponsored her operation with Mr David Anderson two weeks later. Arjeta’s mother Shyhrete (pictured) was delighted with the progress of her little girl in the following weeks, and they were soon able to return home.

Before they went home, our ambassador Felicity Kendal arranged to meet Arjeta and brought with her a few goodies to cheer her up! Arjeta was delighted to meet Felicity and asked her for a hug and a picture! They promised to become pen pals when Arjeta returned home.