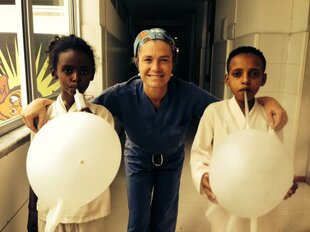 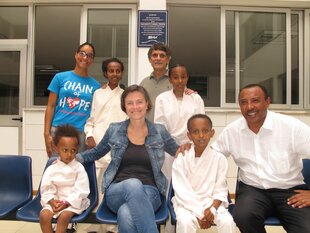 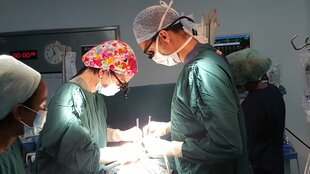 Cardiac Surgeon, Dr Nancy Poirier is flying in from Canada to compete in the London Marathon for Chain of Hope on 3rd October.

Dr Poirier is the head of Paediatric Cardiac Surgery at the University of Montreal and has been leading medical missions with Chain of Hope to Ethiopia and Egypt since 2009, in partnership with Ste-Justine au Coeur du Monde, a cardiac charity based in Montreal, Canada.

Nancy who is a seasoned marathon runner, has competed in seven marathons in cities such as, New York, Chicago, Berlin, Montreal and Paris and says this is her first trip abroad since the pandemic.

‘There is something about the majors, and this (The London Marathon) is one of them and I am looking forward to completing it in under 4 hours,’ Nancy says.

Despite the demands of her role as Division Chief of Cardiac Surgery, Dr Poirier says she enjoys the opportunity to volunteer on missions abroad, where she can teach and learn from her colleagues in developing countries and in turn provide better care to her patients in Canada.

‘I learn just as much as I teach when I go on missions, because these children have been ill so long and sometimes this is pathology I don’t see in Montreal, so it makes me even more ready to deal with children that are extremely ill,’ Dr Poirier explains.

Dr Poirier says she became more interested in volunteering on medical mission after working alongside Chain of Hope’s President and Founder, Professor Sir Magdi Yacoub in Egypt for four years helping to treat children and build up the cardiac services at the Aswan Heart Centre.

‘Then I asked Professor Yacoub if I could help in another centre and he recommended Ethiopia, and that was the right fit and I had the pleasure of working with that team in Addis Ababa for another four years.’

Dr Poirier has also visited Jamaica, where she helps to treat complex cardiac cases in children alongside the team at the Bustamante Hospital for Children in Kingston.

Outside of her busy schedule as a cardiac surgeon and leading overseas medical missions, running marathons is a joy for Nancy and she says she is looking forward to travelling to the UK to compete in the London Marathon.

‘What’s really great and what motivates me, is especially doing it for a cause …and it’s a privilege to be running for Chain of Hope this time,’ Nancy says.