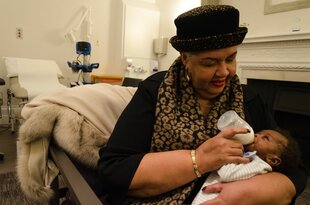 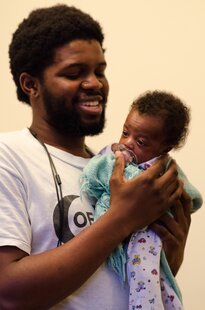 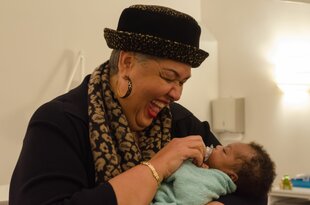 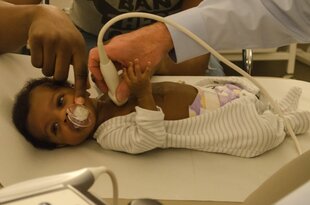 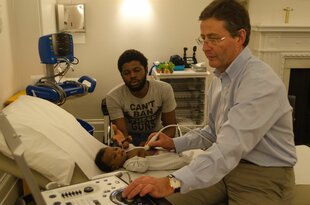 It is news no parent wants to hear, but first-time father Hoshane’s joy of welcoming his new-born was short-lived when he was told his son Jaheim was born with a heart problem that required immediate surgery for him to live.

Further heartbreak came when the 23 year old livestock farmer from Guys Hill in St. Catherine was informed this was a surgery that could not be done in Jamaica.

“I was in shock, I never knew he had a heart problem until he was born. So when the doctor told me at the Spanish Town Hospital that he has a heart problem we had to move him to the Bustamante Hospital for Children,” he explains.

Born on the 1st of November 2015, Hoshane recalls how small and pale his son looked. “When he was born we were told that he had Jaundice, they never knew he had a heart problem until a few days later and he looked so ‘blue’ because the blood was not circulating properly,” he says.

Jaheim was diagnosed with Transposition of the Great Arteries (TGA) a condition which causes blood to flow incorrectly around the body because the two main blood vessels leaving the heart are in the wrong place. This required immediate surgery to perform an arterial switch, a very complex neonatal cardiac operation requiring specific expertise.

The Chain of Hope trained Cardiology team at the Bustamante Hospital for Children in Jamaica quickly referred Jahiem’s case to Chain of Hope in the United Kingdom (UK), who convened an emergency Medical Board meeting of internationally renowned cardiac experts to assess the case.  Less than two days after the referral, the Board gave approval to have the four week old Jamaican baby flown to the United Kingdom to have emergency heart surgery.

“I was so excited to know that I can’t find the money for this operation, but someone is there to help me out,” the young father says when he was told Chain of Hope would be helping to get his son the surgery required. Chain of Hope is a registered charity in the UK that has been linking experts around the world to bring life-saving heart treatments to children in developing and war-torn countries, including Jamaica, for the last 20 years.

Jahiem arrived in the UK on the 2nd December 2015 and was taken by ambulance to The Harley Street Clinic in London, accompanied by a grateful father and Dr. Charmaine Scott a Senior Cardiologist from the Bustamante Hospital for Children.

Chain of Hope Trustee and lead Cardiac Surgeon, Professor Victor Tsang and his team carried out the heart surgery on young Jahiem seven days later. Noting that such a surgery should be done much sooner after birth, Professor Tsang said at that point almost five weeks after birth, Jahiem’s condition had become an emergency.

“Because of the late arrival, the pressure in the lung artery was quite high, and it made the operation quite challenging and the process of looking after the baby after the surgery was also very difficult,” Professor Tsang explains.

Professor Tsang, who over the last ten years has performed other heart surgeries on children in Jamaica through his service with Chain of Hope, says Jahiem is now in good condition and has a bright future ahead. He says for now Jahiem will continue on medications that will reduce the pressure in his lung arteries and with time, will have normal circulation and a healthy childhood.

For father Hoshane, who has taken on full responsibility to care and protect for his son since birth and who has been by his bedside in the hospital every day, Jahiem is already in good condition and is very active and playful. “Now he’s the right complexion and is moving up a lot, he is just very active, crying and everything,” he says joyfully.

Jamaica’s High Commissioner to the United Kingdom, Her Excellency Mrs. Aloun Ndombet-Assamba, who visited the father and son in hospital before they left for Jamaica, says she was very happy to see young Jahiem strong and active.

“What was really impressive for me is seeing how he bonded with his father who came with him because his mother was not able to come, and then to see how the persons who cared for him at the Harley Street Clinic were interested in him, was just amazing,” Mrs. Ndombet-Assamba says.

Mrs. Ndombet-Assamba agrees that Jahiem’s case was special because of the urgency of his situation. “They’ve helped hundreds of Jamaican children before, but because of the type of problem Jahiem had, the surgery had to be done within six weeks of the child being born, so it means that he came here when he was just a month old,” she adds.

The young father is praising the team at Chain of Hope for their support and care and for giving his son another chance to live. “I thank them a lot for this opportunity to know that I couldn’t find the funds to get this operation done and it is all done and I don’t have to pay for nothing,” he says.

Chief Executive Officer of Chain of Hope, Emma Scanlan, says the charity is privileged to have been able to help Jahiem and his family. “There are so many more children in Jamaica that need treatment. It is our goal and dream that by training a world class Jamaican cardiac team, many more children can be treated locally in the future at the Jamaican children’s heart centre which is being constructed at the Bustamante Hospital for Children.”

Jahiem and his dad Hoshane returned to Jamaica this week after a successful surgery to reunite with his mother who has not held her first son for more than two months. For Hoshane who said he grew up without a father, this experience has created a special bond with his son which he will continue to cherish as he works to give him the best opportunities in life.